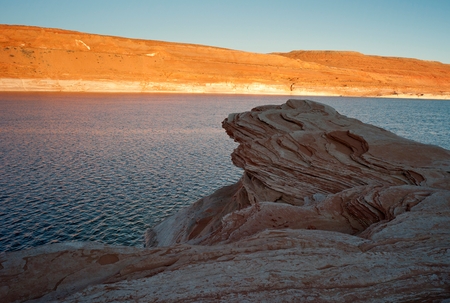 If you were to go to Lees Ferry, you’d be at a site on the Colorado River in Arizona, about 9 miles south of the Utah-Arizona border. Lees Ferry is unique because it’s the only place for hundreds of miles where you can access the Colorado River from both sides… easily. Back in the day, it was an important river crossing, named after John Doyle Lee’s ferry service. Like anything, times changed– a bridge was built, replacing the need for the ferry, though the name stuck.

An Overview of Lake Powell

If you were to travel up the Colorado River, and you could get past the Glen Canyon Dam, you’d end up in Lake Powell, which is considered a reservoir on the Colorado River. Lake Powell is mostly located in Utah, though some of it is in Arizona. As a vacation spot, the lake is popular with tourists, with some 2 million visitors annually. In an area known for little rain and really hot temperatures, the lake is like an oasis in the desert. Did you know that Lake Powell is the second largest man-made reservoir in the USA? It’s right behind Lake Mead in terms of maximum water capacity. Interestingly, Lake Powell was created by the flooding of Glen Canyon by the Glen Canyon Dam. It provides water for many areas of the Southwest, including Colorado, Utah, and New Mexico.

Some of the highlights near Lake Powell include the Glen Canyon Dam, the Rainbow Bridge (a naturally formed bridge), and the Hite Crossing Bridge. The area is picturesque and has been the filming location for many TV shows and films, including Planet of the Apes (1968 and 2001 versions) as well as Gravity, Evolution, and Maverick.

Want to do some fly fishing at Lees Ferry, which isn’t too far from Lake Powell? Marble Canyon Outfitters at Lees Ferry can make that happen, with excellent guides; call 800-533-7339 to arrange your fishing trip today. Oh, and bring your camera as the scenery is just spectacular.