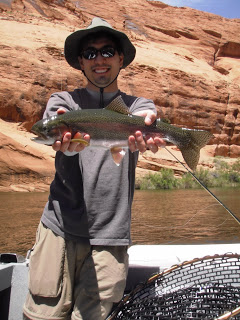 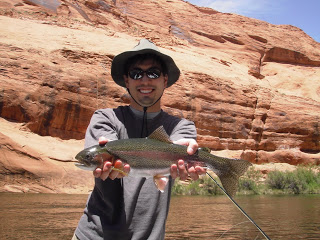 June is the start of our summer, this year has had a cold start, so we are still having day temperatures in the mid 80’s.
The Colorado is running 22,825 cfs, high water for us, and with that being said we are still have great success and lots of fun out there. The high water just changes our tactics a little. I have been having the most success drifting my favorite gravel bars, with a 12′ nymphing rig, 2 flies, and AB weight, and a double indicator. The double indicator is for a visual confirmation of the dead drift, which is the most important skill when trying to be successful with this rigging and technique.
The flies that I’m having the most success with are; San Juan worms in brown, rust, and flesh colors(live colors), also scuds; these I like the dead pattern, your classic pick scud works best.
Last but not least; I have had a little free time on the water, and have been experimenting with the “Big Buggs” (terrestrial patterns), and to my surprise, been having some success. As the temperatures have not reached triple digits yet, the cicada’s themselves, have not yet made an appearance. But this early success coupled with the already high water flows, may mean a banner “big bug” season for The Ferry in 2011.
Until next time, always remember to keep that tip up, and may all your lines be tight’
A special thanks the Kuo family; Kane, Amy, Sammy, Kay-Kay, and Kane’s brother Eric who on the first drift with the nyphing rig explained above, caught this FAT 21” female (shown in two pictures above).
Mick Lovett
M.C.O.
For More Details, Visit Home at https://leesferryflyfishing.com
← Previous Post
Walk In →