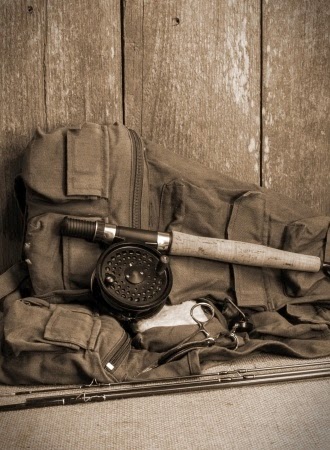 All the way across the country from the fly fishing at Lee’s
Ferry, The American Museum of Fly Fishing sits in Manchester, Vermont. It
showcases the history, traditions and practices of the sport of fly fishing. Even
though Vermont is far away from the Colorado River and Northern Arizona, one thing’s
for sure—fly fishing has shown itself to be one of the most nationally
appreciated hobbies and pastimes time and time again.

Fly fishing in the United States got its start when anglers tried using
artificial lures in the streams of the Catskill Mountains of New York in the
late 1800s. One fisherman, Charles F. Orvis, developed America’s first fully
modern fly reel. Today, there are Orvis stores around the country selling products
for people who like to spend time outdoors in nature.

The sport of fly fishing increasingly caught on right through the turn of the
century. It has been said that fly fishing peaked in the 1920s, as anglers took
to the waters of New England and the Midwest en masse. Writer Ernest Hemingway
helped expose the sport to people through his writing, including the 1926 book The Sun Also Rises. Then, in the 1950s,
another peak time for fly fishing occurred as new developments in the rods, fly
lines and leaders made the sport less expensive, and thus more accessible to
the general population.

Brad Pitt—yes, Brad Pitt—helped fly fishing enjoy yet another resurgence in the
1990s when he was seen fly fishing in the 1992 Robert Redford hit movie A River Runs Through It.

Marble Canyon Outfitters’ Mick Lovett is an Orvis-endorsed fly fishing guide
who landed his first fish on a fly rod at Lees Ferry when he was 4-years-old. Our
fly fishing experiences carry on the time-tested tradition of fly-fishing in
one of the most spectacular natural settings in the country. Visit our website to book your trip today.

← Tips for Fitting in on Your Lee’s Ferry Fly Fishing Tour
Spring, midges, and low flows →